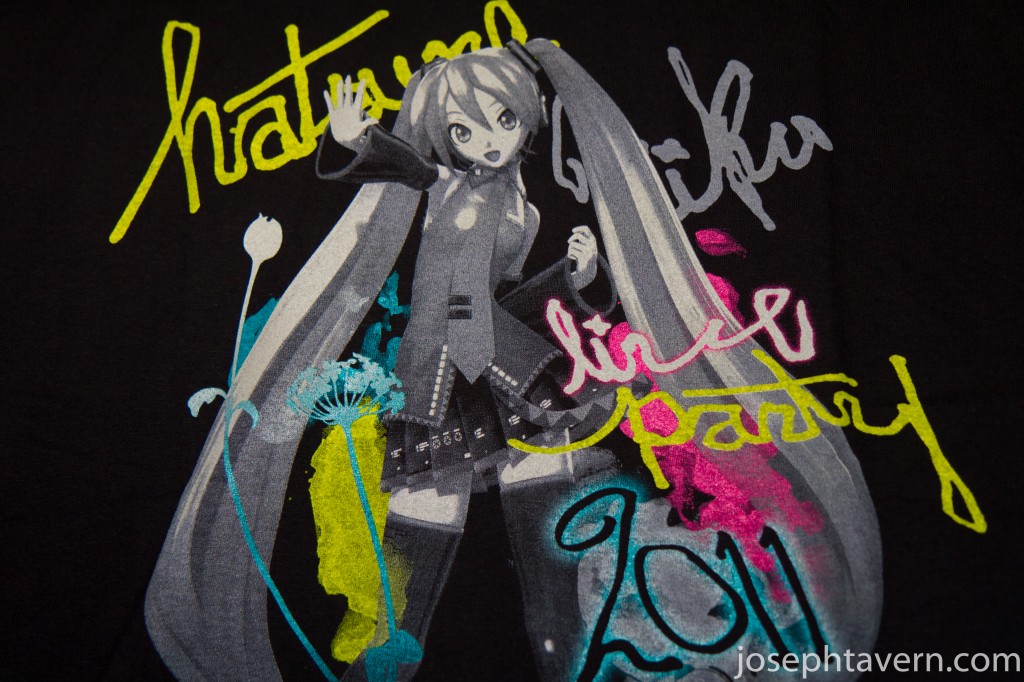 Hatsune Miku Live in Singapore was actually part of the AFA 2011 event held at the Suntec Convention Center.

By the way, the Image above is the shirt that I bought during the concert. Don’t know how much others paid for them, but Seems like my new friend from Indonesia got it online. If you like the design, please go to the nearest CosPa store to ask for it. Usually they do have some stocks.

Initially, i wasn’t expecting much of a crowd to turn up. This is partly due to the fact that I am the only Miku Fan (or Anime Otaku) in my circle of friends, and my inability to sniff out Miku fans around me. Anyway, after getting my pass and landyard….. I went for some dinner by myself, eating something that I haven’t ate for a while… I proceed back to the hall, and found myself looking at a queue that extends from here…. and all the way to here… Yes… the queue to grabbed the lightsticks and Landyard stretches across almost half the hall. I was both amazed, and felt really lucky that I did not arrive later than when I did.

And even Miku herself needs to queue…. And those people in the foreground, they are here to “camp” for good “standing position”, within the standing area. Once I finally got into the stage area, I found myself staring at rows and rows of cheap plastic chairs…. And Snow Miku was sitting not far from me also, chatting happily with her friend. Our friend who came from all the way from Japan, was holding to his prized Tako Lukas. If you know who he is, please ask him to contact me. I want to send him his pictures. The hardcore fans are also gathered some rows behind me…. After the event, I was quite shock at that the amount of people trying to get out of Suntec City…. I mean, if this is during a PC show, I would understand. But, a Miku concert, seems like I underestimated Miku Fans from Singapore, and all around the world.

And while walking to the MRT station, I saw some nice scene, one which Singaporeans would be familiar with, like the CBD….. And the World War 2 relic…. And for some reason, the estate’s cat was waiting for me today…. I will be updating this article tomorrow… too tired.. haha.

One Response to Miku Hatsune Live in Singapore